A distinctive feature of Hazelcast Jet is that it has no dependency on disk storage, it keeps all of its operational state in the RAM of the cluster. Here are some details on how that storage works.

Data is Partitioned and Replicated

Hazelcast Jet divides the key space into partitions (aka. shards) and maps each key to a single partition. By default, there are 271 partitions. For each partition, Hazelcast creates multiple replicas, and assigns one replica as primary and other replicas as backups.

We'll walk through a scenario with 3 Jet nodes and 12 partitions, as shown in Figure 1. Primaries are blue, backups red. For instance, the 1st node keeps primaries for partitions 1, 4, 7, 10 and backups for partitions 2, 3, 5, 6. On the top, in yellow, there is a single Jet processor (local parallelism = 1) that does a group-and-aggregate operation. 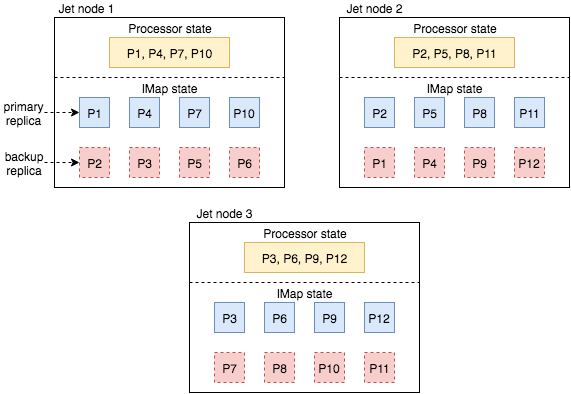 The DAG edge that delivers the data to this processor is of the partitioned-distributed kind. For each item Jet first extracts its key, computes the key's partition, looks up the processor in charge of that partition, and sends it there. Every processor maintains its own internal state.

Snapshots are Stored in IMap

When a processor receives a snapshot barrier from its input streams, it saves its internal state to the Hazelcast IMap which is created for the current snapshot. Figure 2 shows how state objects of the first processor instance end up in the local node's primaries, thanks to the same partitioning scheme used for both processing and storage. Additionally, backup copies of these state objects are sent to the 2nd and the 3rd node. 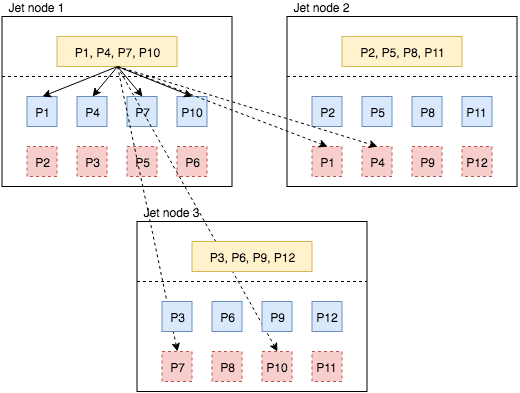 Let’s see how we make use of the partition replicas to recover processor state after a change in the cluster topology. In Figure 3 we added a new node to the Jet cluster. Hazelcast Jet rebalances the partitions and assigns some partition replicas to the new node. It uses the consistent hashing algorithm to move a minimum amount of data between the nodes while rebalancing. In our scenario, the new node receives one primary and one backup from each existing Hazelcast Jet node. For instance, from the 1st node it receives the primary of partition 1 and backup of partition 2. After rebalancing the job is restarted and processor states are initialized from local replicas of the snapshot. 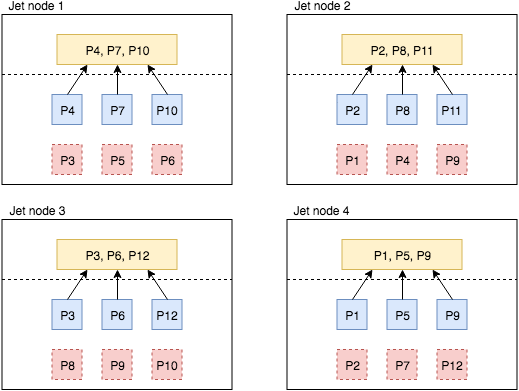 Data Recovered from Backups when a Node Fails

Finally, Figure 4 shows how Hazelcast Jet recovers from the failure of 1st node. Before the failure, 2nd and 3rd nodes were keeping the backup replicas for the partitions assigned to the 1st node. After the failure, the 2nd node promotes partitions 1 and 4 from backup to primary. Similarly, the 3rd node promotes partitions 7 and 10. After promotion these partitions lack a backup so the nodes create new backup replicas for each other, as shown with the bold-dashed green boxes. After this point, processor states are restored from the local primary partition replicas.