This is a followup on Part 1 of the blog post series we started earlier this month, analyzing the performance of modern JVMs on workloads that are relevant to the use case of real-time stream processing.

As a quick recap, in Part 1 we tested the basic functionality of Hazelcast Jet (sliding window aggregation) on two types of workload: lightweight with a focus on low latency, and heavyweight with a focus on the data pipeline keeping up with high throughput and large aggregation state. For the low-latency benchmarks we chose the JDK 14 as the most recent stable version and three of its garbage collectors: Shenandoah, ZGC, and G1 GC.

Our finding that Shenandoah apparently fared worse than the other GCs attracted some reactions, most notably from the Shenandoah team who reproduced our finding, created an issue, came up with a fix, and committed it to the jdk/jdk16 repository, all in the span of a few days. The change pertains to the heuristics that decide how much work the GC should do in the background in order to exactly match the applications allocation rate. This component is called the pacer. It was constantly detecting it's falling behind the application, triggering a brief "panic mode" in order to catch up. The fix fine-tunes the pacer's heuristics to make the background GC work more proactive.

Given this quick development, we wanted to test out the effects of the fix, but also take the opportunity to zoom in on the low-latency streaming case and make a more detailed analysis.

Here are our main conclusions:

The JDK We Tested

Since this is all so fresh, we couldn't use an existing JDK release, not even EA, to see the effects of the fix. JDK version 14.0.2 is slated to be released on July 14. To nevertheless make progress, we took the source code from the jdk14u tree, at the changeset number 57869:e9d41bbaea38, and applied the changeset number 59746:29b4bb22b5e2 from the main jdk tree on top of it. The jdk14u tree is where JDK 14.0.2 will be released from and the changeset 59746:29b4bb22b5e2 applies the patch resolving the mentioned Shenandoah issue.

There are two HotSpot JVM options whose default values change automatically when you use the ZGC so we had to decide which choice to make when testing the other garbage collectors.

There is also a JVM feature that is simply incompatible with ZGC's colored pointers: compressed object pointers. In other words, ZGC applies -XX:-UseCompressedOops without the option to enable it. A compressed pointer is just 32 bits long but handles heaps of up to 32 GB and it's usually beneficial to both memory usage and performance. We left this option enabled for Shenandoah.

For the G1 collector, we also set -XX:MaxGCPauseMillis=5, same as in the previous testing round, because the default of 200 milliseconds is optimized for throughput and the G1 can give you much better latency than that.

To get a more nuanced insight into the performance, we made some improvements to the testing code. Whereas in the first iteration we just reported the maximum latency, this time around we wanted to capture the entire latency profile. To this end we had to increase the number of reports per second the pipeline outputs. Initially we set it to 10 times per second, a number which results in too few data points for the latency chart. The pipeline in this round emits 100 reports per second. The event rate and the length of the time window are the same: 1 million events per second and 10 seconds, respectively. This results in 1,000 hashtables each holding 10,000 keys as the aggregation state. We tested across a wide range of keyset sizes, starting from 5,000 up to 105,000.

Note that the size of the keyset, somewhat counterintuitively, does not affect the size of the aggregation state. As long as the 10,000 input events received during one time slice of 10 milliseconds all use distinct keys, the state is fixed as described above. Only in the lowest setting, 5,000, the state is half as large since every hashtable contains just 5,000 keys.

What the keyset size does affect is allocation rate. The pipeline emits the full keyset every 10 milliseconds. For example, with 50,000 keys that's 5,000,000 result items per second. If we add to that the rate of the input stream (a fixed million events per second), we get a value that is a good proxy for the overall allocation rate. This is why we chose combined input+output rate as the x-axis value in the charts that we'll be showing below.

Here is the basic code of the pipeline, available on GitHub:

The main part, sliding window aggregation, remains the same, but the following stages that process the results are new. We write the data to two files: laten, containing all the raw latency data points, and bench, containing an HDR Histogram of the latencies.

Another key difference is that, in the original post, we measured the latency of completing to emit a result set, but here we measure the latency of starting to emit it. Since we are changing the size of the output, if we kept measuring the completion latency, we'd be introducing a different amount of application-induced latency at each data point.

There's another, relatively minor technical point worth mentioning: since we tested on a cloud server instance, we used Jet's client-server mode, which means we separately start a Jet node and then deploy the pipeline to it using Jet's command jet submit. The code available on GitHub is the client code and the Jet server code was a build from the Jet master branch before Jet 4.2 was released. We expect all the results to be reproducible with the Jet 4.2 release.

What Exactly We Measured

We measured the latency as the timestamp at which the pipeline emits a given result minus the timestamp to which the result pertains, giving us end-to-end latency (the only kind the user actually cares about).

Keep especially in mind that latency does not equal a GC pause. Normally, neither Shenandoah nor ZGC enter anything more than a millisecond of GC pause, but their background work shares the limited system capacity with the application. With G1 the equivalence is much stronger and its 10-20 millisecond latencies are primarily the result of GC pauses that long.

To come up with the charts below, for each data point we let the pipeline warm up for 20 seconds and then gathered the latencies for 4 minutes, collecting 24,000 samples.

Here is the latency histogram taken at 2 million items per second, close to the bottom of our range: 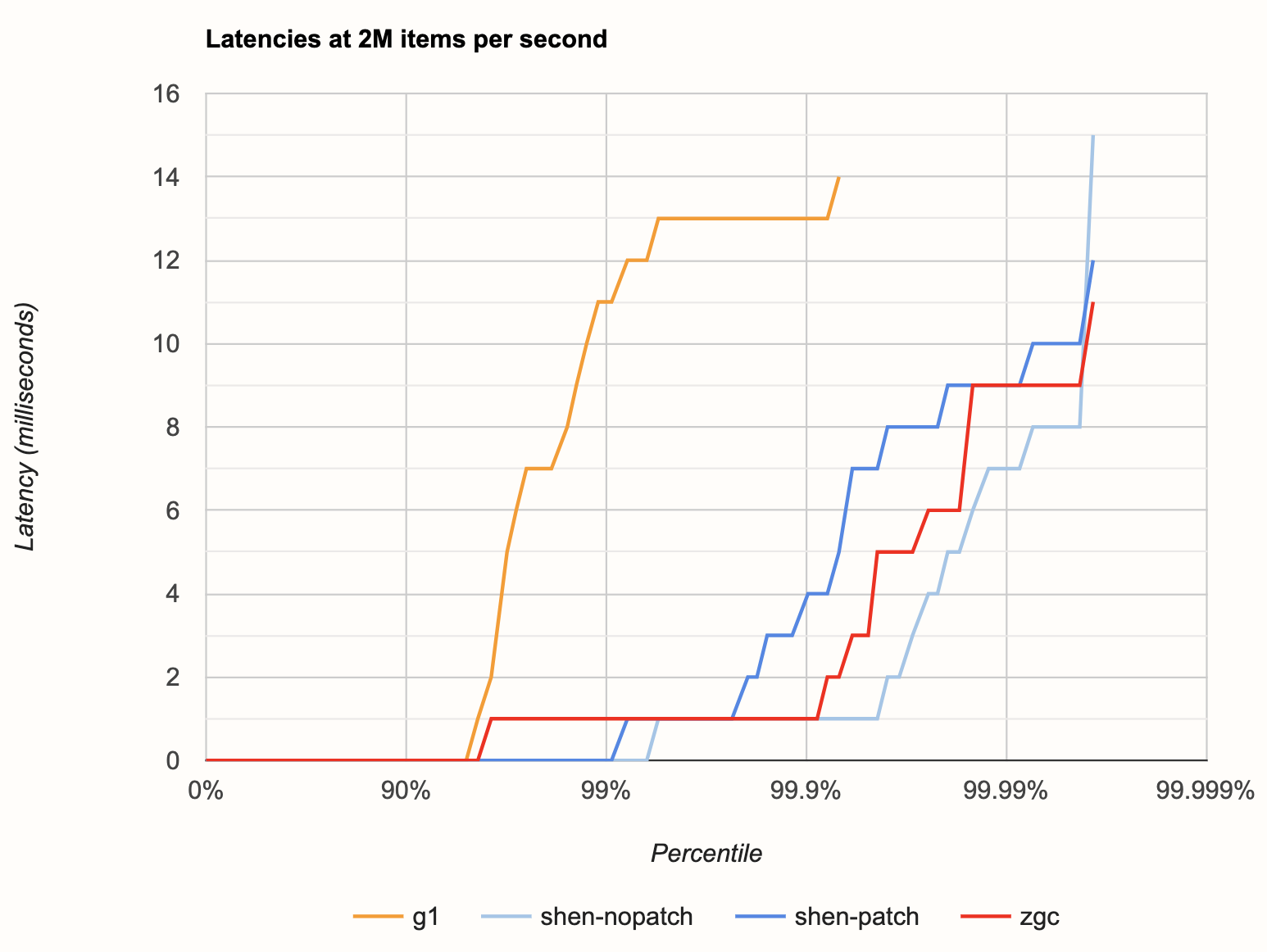 Unpatched Shenandoah seems like the winner, except for the single worst-case latency. With the patch applied, latency increases sooner but more gently and doesn't have a strong peak. ZGC comes somewhere between, but overall all three cases show pretty similar behavior. G1 is clearly worse and its latency exceeds the 10 ms mark before even reaching the 99th percentile. Since our pipeline emits a new result set ever 10 ms, we shall consider 10 ms as the cutoff point: everything above 10 ms should be considered a failure for our use case.

Next, let's take a look at the latencies after increasing the throughput a bit, to 3 million items per second: 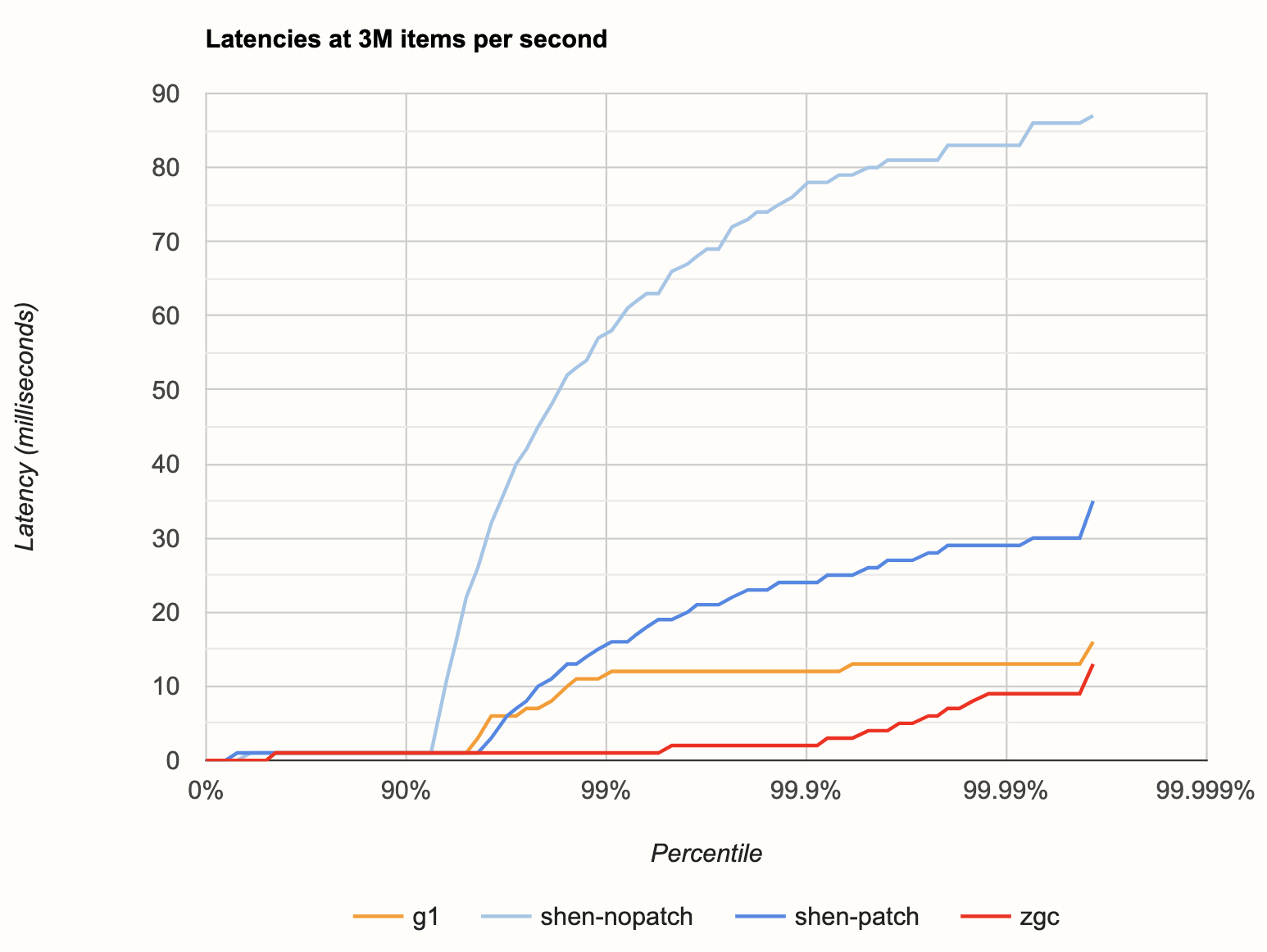 Wow, what an unexpected difference! Now we can clearly see the pacer improvement doing its thing, lowering the latency about threefold. However, even with the improvement, Shenandoah unfortunately crosses the 10 ms mark pretty early, below the 99th percentile, and is worse than G1 at almost every percentile. ZGC and G1 score basically the same as before.

Note also the very regular shape of the pale blue curve (unpatched Shenandoah): this is a symptom of the way a single bad event trickles down into the lower latency percentiles. For example, if one result is late by 50 ms, that means it has already caused the next four results to have at least the latencies of 40, 30, 20, and 10 ms, even if they would be emitted instantaneously.

Next, let's zoom out to an overview of the entire range of throughputs we benchmarked, taking the 99.99%ile as the reference point and showing its dependence on throughput. To paint an intuitive picture, 99.99% latency tells you that, in any span of 100 seconds you look at, you're likely to find a latency spike at least that large. Here's the chart: 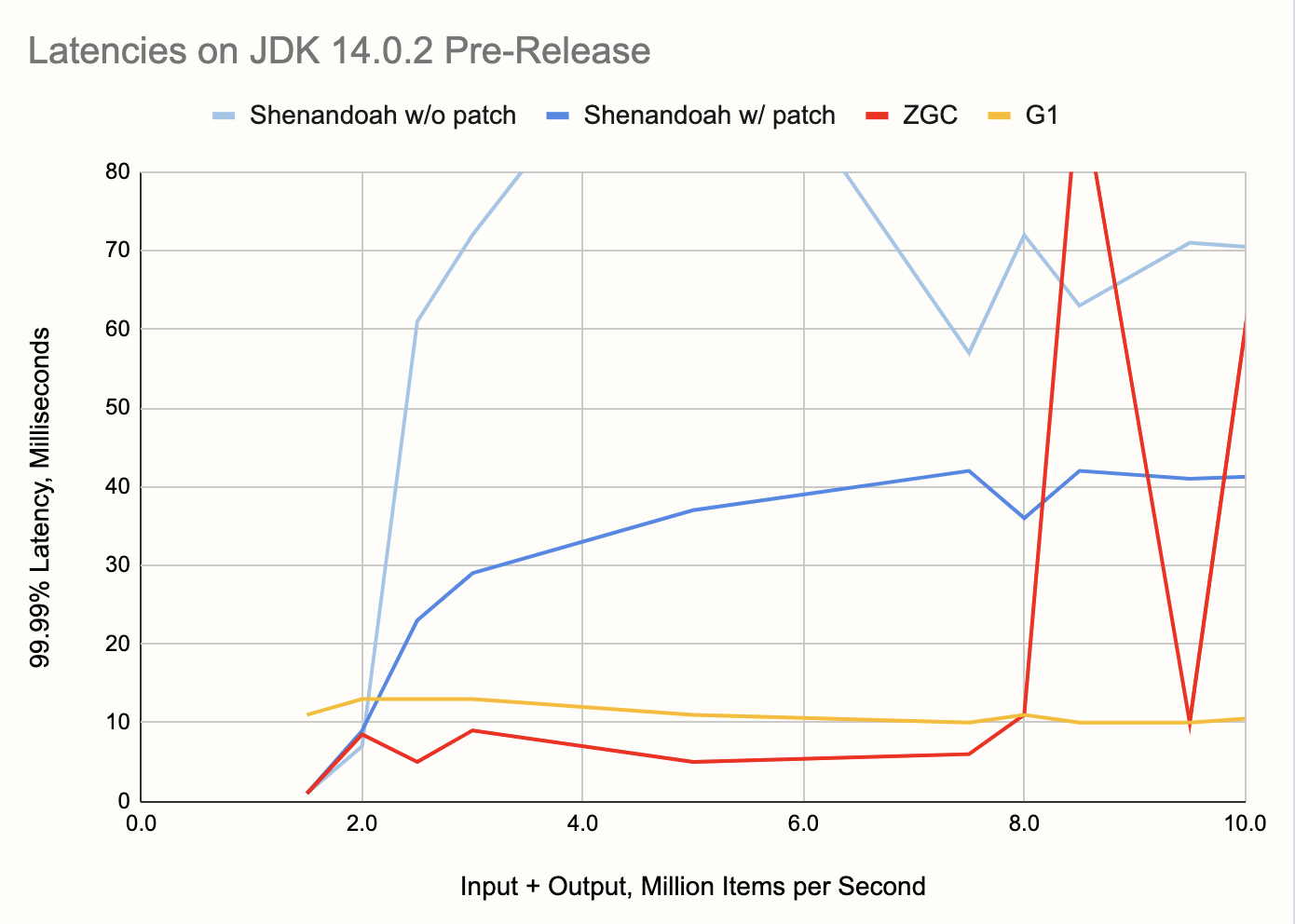 Here are some things to note:

A Sneak Peek into Upcoming Versions

As a preview into what's coming up in OpenJDK, we also took a look at the Early Access release 27 of JDK 15. Shenandoah's pacer improvement is not applied in it, so to properly test Shenandoah's prospects we used a build available at builds.shipilev.net/openjdk-jdk, specifically one that reports its version as build 16-testing+0-builds.shipilev.net-openjdk-jdk-b1282-20200611. Out of interest we also doubled our throughput range to capture more of the behavior after the latency exceeds 10 milliseconds. Here's what we got: 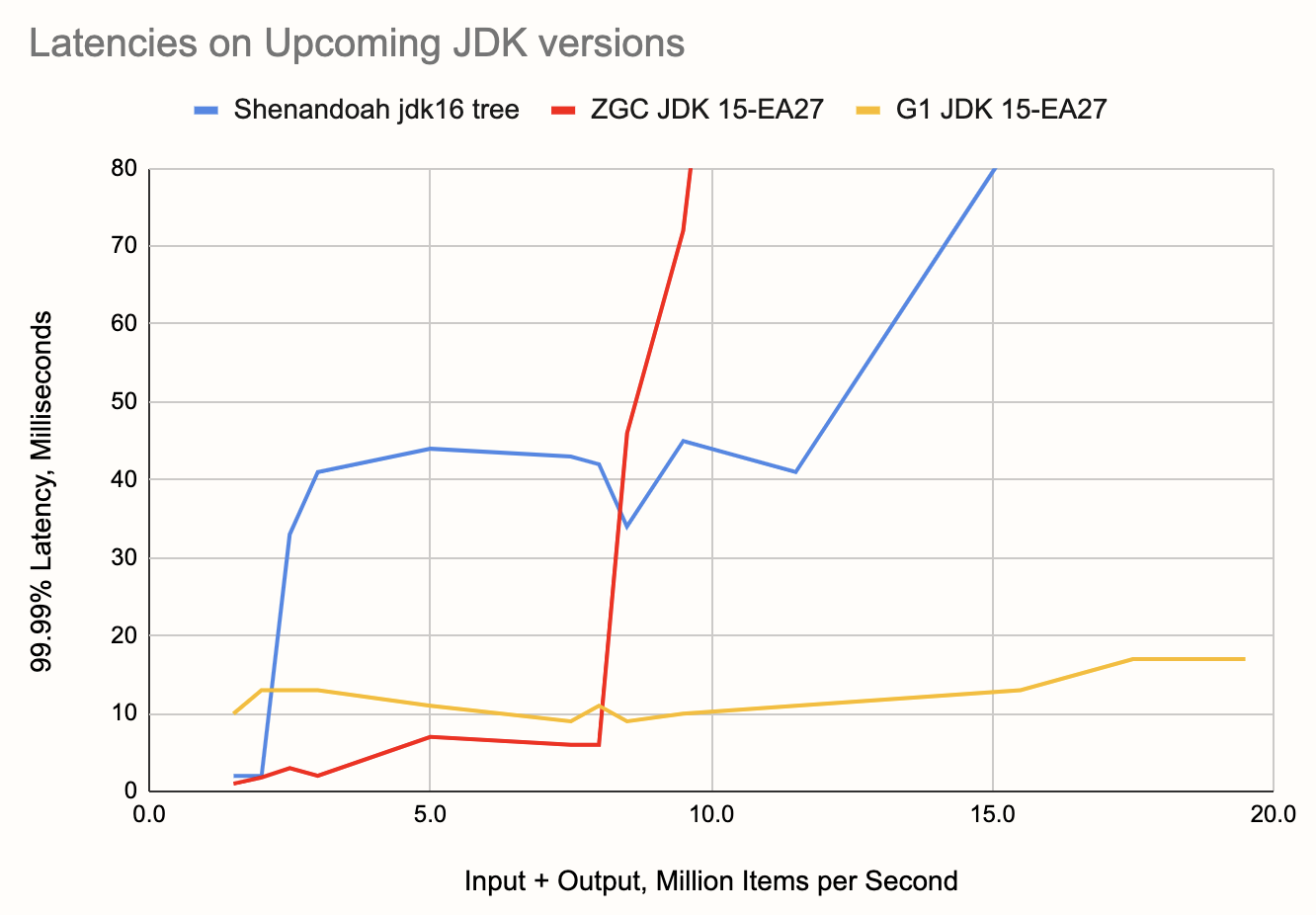 We can see a nice incremental improvement for the ZGC: less than 5 ms latencies at throughputs below 5 M/s. Shenandoah's curve is even a bit worse at 2.5-3 M per second, but generally pretty similar. At higher loads we can see ZGC's failure mode is quite a bit more severe than Shenandoah's, although just how bad the latency gets doesn't affect the bottom line of a scenario where everything above 10 ms is already a failure.

The wider chart also gives better insight into the stability of G1, keeping itself below 20 ms all the way up to 20 M items per second.