Implementing data processing pipelines occasionally requires calling an external service, for example: predicting/classifying based on a ML model, looking up records from a database or a full-text search engine, and using a dedicated platform that computes financial risk exposure.

These are the typical reasons why you'd want to have some processing done outside of the Hazelcast Jet infrastructure:

gRPC is an RPC system that trades a bit of convenience for much better performance, and also includes first-class support for several critical concerns. Quoting from their website:

gRPC is a modern open source high performance RPC framework that can run in any environment. It can efficiently connect services in and across data centers with pluggable support for load balancing, tracing, health checking and authentication.

With gRPC you define the service endpoint and the messages using Protocol Buffers (Protobuf) and its interface description language (IDL). The tooling then generates code for the server, serialization and deserialization of the messages, and the client. Hazelcast Jet's gRPC module makes it convenient to use the generated code to call the endpoint from a Jet pipeline.

The gRPC framework provides several RPC types, but most commonly used are unary RPC and bidirectional streaming RPC. Unary RPC is what's usually called just "RPC": the client sends a request and receives a response. With bidirectional streaming RPC, the client starts a single request, writes any number of messages to the request stream. Then the client receives any number of messages in the response stream, which makes it more similar to a messaging system with 2 topics than RPC.

Using gRPC from a Jet Pipeline

With Hazelcast Jet 4.1 we have released first-class support for accessing gRPC endpoints from Jet pipelines. In this post we investigate the performance of the gRPC-Java framework and the effects of various settings on maximum throughput both in vanilla gRPC and in a Jet environment.

Let’s start with an example of calling a gRPC endpoint from Jet. For example, given this protobuf definition:

We can create the following service factory:

The first lambda returns a client channel builder. Jet uses the builder you provide to create gRPC channels, which correspond to network connections. You can set any desired configuration options on the builder, such as compression and encryption. These will turn out to be relevant to our investigation.

The second lambda takes a gRPC client channel obtained from the builder and returns a function which Jet will call for each item of the pipeline. The class GreeterGrpc is auto-generated by gRPC and its newStub method creates the client stub. You can change the default settings before returning it from the lambda. We won’t modify this further in our investigation.

Once you have constructed a ServiceFactory, you can pass it to a Jet pipeline stage transform such as mapUsingServiceAsync. Jet uses the factory to create instances of the service, and passes these to the lambda you provide. Here's an example:

The word Async in the stage transform name means that the lambda function must return a CompletableFuture<T>, and in our case service.call() returns just that.

We ran the benchmarks in AWS on 2 instances of type c5.9xlarge. This instance type has:

One instance ran a single Hazelcast Jet member, the other one ran the gRPC server.

The gRPC-Java framework provides its own set of benchmarks. We will use these to establish a baseline to compare with the performance of our Jet pipeline. The benchmark consists of running a gRPC server and a client.

We issued this command to start the server:

And to run the client:

The parameters relevant to our investigation are:

Here's an example of of the output:

Our focus for this benchmark was throughput, so we focused on the QPS metric - Queries Per Second. The results are quite interesting: we could clearly identify the number of channels as the most important factor. Using 72-108 channels increased the throughput by 20x-30x, compared to the baseline of one channel. Since we're using very small messages, per-message overhead inside the gRPC layer dominates over the network limits. This is why you can achieve more throughput by adding more channels. 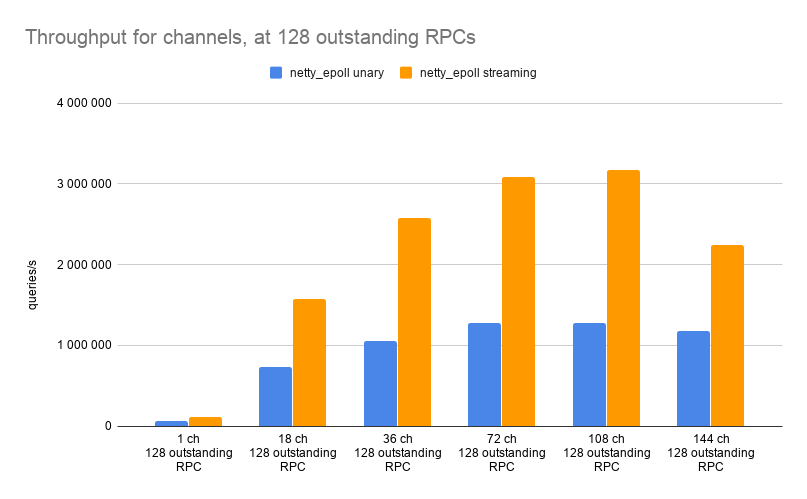 As for the transport epoll and NIO transport types - it seems that for unary calls they both reach similar maximum performance, but overall, NIO is better. For streaming calls, epoll wins in maximum performance with similar results using 108 channels and 128 outstanding RPCs or 72 channels and 256 outstanding RPCs. With other settings there doesn’t seem to be a clear winner. 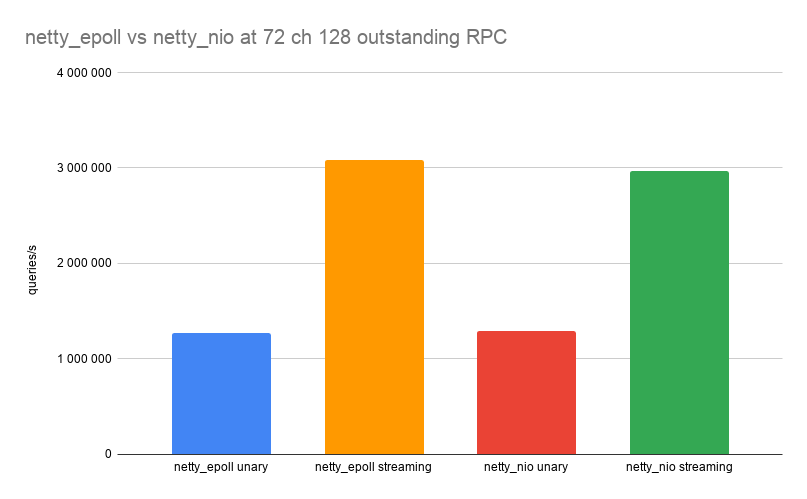 All charts present best results for various configurations of number of channels, outstanding RPC etc. The full data is available in this spreadsheet .

We created 2 types of workloads on the gRPC server side:

We ran each workload as:

In the Jet pipeline we don’t have the exact same parameters as in the gRPC benchmark, but there are similar ones:

This is the pipeline for a unary service, all the other benchmark pipelines follow the same pattern:

This benchmark is very similar to the benchmark from gRPC repo. It is doing minimal work on the gRPC server side and measures overhead of the Jet pipeline and network. 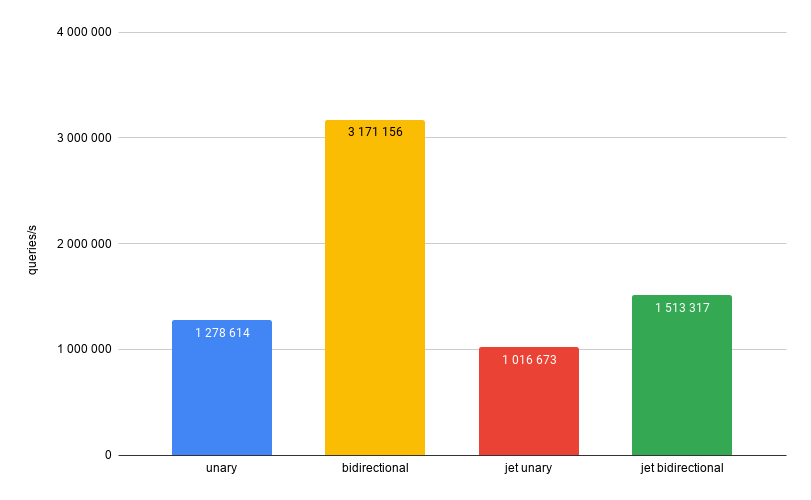 Similar to the gRPC benchmark, we can observe that to achieve maximum throughput we need to increase the number of channels and the maxConcurrentOps parameter. 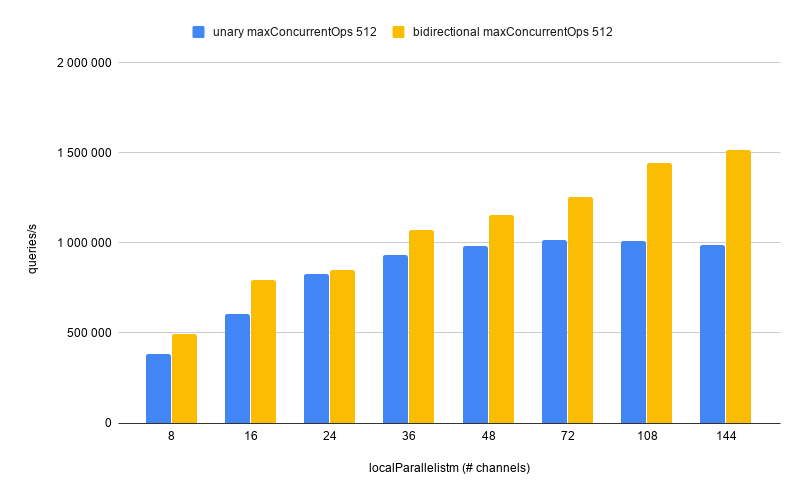 We also tried each RPC with a modified message type containing a batch of messages in combination with mapUsingServiceAsynchBatched. This is not always possible to do - you need to be able to change the interface of the server, but if you can, it provides a huge boost to the throughput.

Jet uses what has been variously called natural or smart batching. Typically, a batching algorithm creates batches of fixed size or waits for a fixed time to create a batch. This increases latency in low-throughput scenarios. Smart batching instead creates a batch from whatever items came in while the previous batch was being processed. When the traffic is low, this results in small batches (including single items), preserving the best possible latency, and as the traffic grows, larger batches automatically form, up to the limit set by the maxBatchSize parameter.

After modifying the endpoint to work with batches, our results improved dramatically:

Note that for this benchmark there is no maxConcurrentOps setting, because mapUsingServiceAsyncBatched doesn't have it as a configurable option. 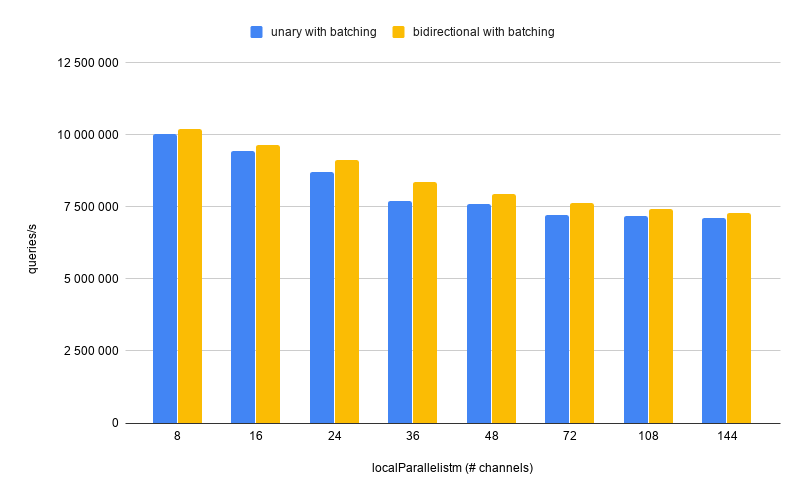 This benchmark simulates a task that takes 10 ms to complete and is CPU-bound. Because our testing machine has 36 vCPUs, the theoretical maximum throughput is 3600 requests/s.

Interestingly, we can see that unary RPC reaches the maximum possible throughput for all settings, however bidirectional only for 36 channels. The results don’t change significantly for different maxConcurrentOps settings. 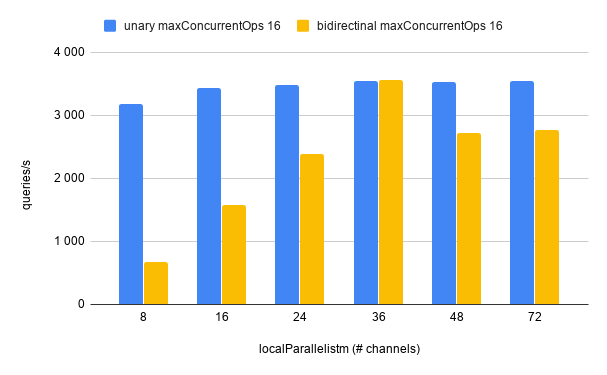 In this scenario, smart batching no longer has a significant edge. Unary only gets close to a maximum with 72 channels. Bidirectional achieves maximum throughput with both 36 and 72 channels. 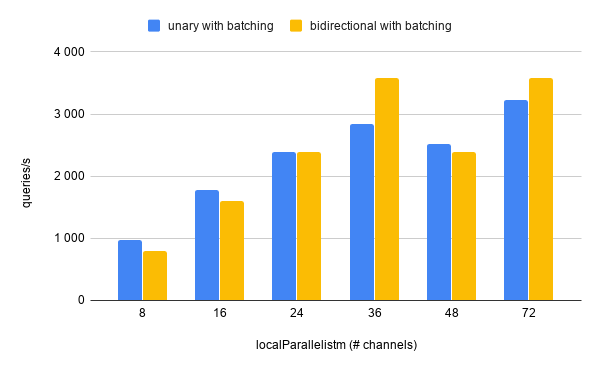 We can draw several conclusions from our investigation:

So in any case you should test in your environment and your own workload to find the most advantageous setup.

For a full guide on how to use Jet's gRPC functionality and API details, please see the manual.

The benchmark code is published on github.com

The spreadsheet with all the results can be seen here.